If you’ve taken one look at the title of this article and decided to click through because you don’t think beer and food pairing is suitable for your site, you may want to think again and read the following. Food and beer pairing isn’t just for ‘gastro’ pubs or specialist beer pubs, it’s the cornerstone of any decent pub serving good quality beer. A packet of cheese and onion crisps, or a bag of pork scratchings with a pint of traditional English ale is beer and food pairing. Don’t be daunted by beer and food pairing because you think your menu is too limited, or that there are ‘rules’ which must be followed.

There are some real commercial benefits to putting some thought and promotion behind offering food with beer. It’s also worth considering that the biggest reason people visited the pub in 2016 was to have a meal.

You want to increase beer sales? Beer and food together can do just this by:

Having a glass of wine with a meal is often the automatic drink of choice, but there is an opportunity to differentiate your outlet by matching some of the items on your menu with your cask ale range. If you think this is a new concept, think again. As a nation we are not averse to having beer with a meal – think about when you have a curry, or spicy food. We automatically reach for the beer, because we know how well it quenches the heat of the food and refreshes the palate.

Cask ale and craft beer offers a diverse and huge range of flavours and aromas, equal to a wine menu. Pubs giving beer recommendations with food have seen huge engagement amongst customers, especially if the drink is served in the correct branded glassware.

Beer has a wide palate of flavours – some similar to wine, some completely different. Some beers have roasted, malty, biscuity flavours which go really well with traditional British fayre such as sausages, roast dinners and pies. Most meats, when slow cooked, start to caramelise and release sugars, which are well matched with the maltiness of traditional English ales.

The recent popularity of ‘blonde’ and heavily hopped ales is a god send to spicy foods. The lemony, citrusy flavour of the hops cut through the heat of spices and chillies, refreshing the mouth. These also go very well with most fish dishes.

Dark heavy ales can also be used to great effect with desserts and chocolate. A thick treacly stout or robust porter acts as a fantastic contrast to the sweetness of a pudding. Think of the beer like a rich dark coffee – which we all know matches desserts perfectly.

The beauty of beer is its versatility – it has no problems with any ingredients.

Remember, you don’t have to have a full and varied menu to make food and beer work. A great example is cheese. It’s only in the last 20 years that the on-trade has started getting serious about food. Prior to this, a pubs food offering usually consisted of a Ploughman’s lunch – cheese, cold cuts of meat and pickles. Publicans knew this was a perfect match for cask ale, and this still applies today.

Cheese goes brilliantly with most beers for this reason: cheese coats the tongue with fatty residues. Cask ale has a slight carbonation in it so it ‘scrubs’ the tongue (like a scouring pad), clearing the palate ready for the next mouthful of cheese.  Some of the best cask ale outlets in the country offer cheese platters or continental meat platters to go with their cask ale range. It’s simple, effective, and ultimately keeps customers in the outlet for longer.

Currently there is a lot of interest amongst consumers (and the media) about matching cask ale with food. Hundreds of articles have been written about it, but it is a very new idea for most people – and it’s about confidence. We can talk all we want about the gastronomic delights of pairing beers with food, but talking is not the same as doing.  Until they have experienced it, customers will not believe a word of it, and staff are afraid to recommend it. Unless someone persuades them to try a beer instead of a wine, it will always remain a mystery. So a small sample of the beer offered to diners can open their eyes to how well beers go with certain foods.

If you want to learn more about food with beer, check www.beerforthat.com.  It offers a beer matching service to any food you can think of, naming specific brands and styles of beer which are matched by an expert Beer Sommelier. 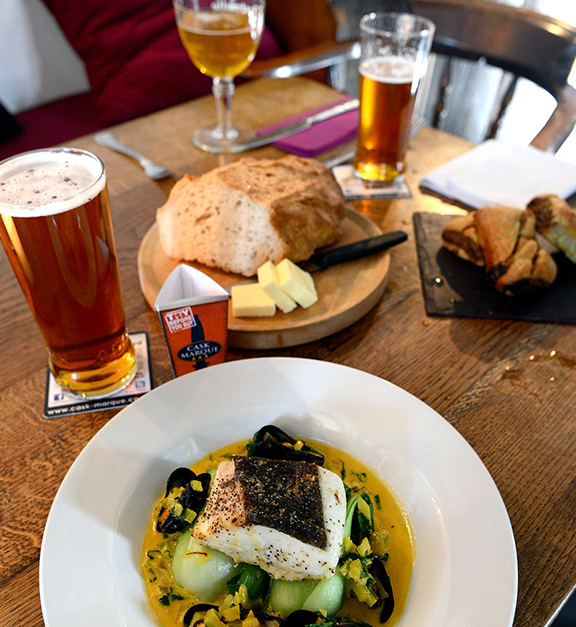